My goal with this short essay is to analyze player decisions regards the Book of Laws and how this system transcend the game to have implications outside it. My main motivation to make this analysis is that I love strategy games but also meaningful games, so I want to grasp how systems, narrative and mechanics could be combined to create a more compelling experience for players.

Despite having many interesting systems, I will center this analysis in one of the most important systems of the society survival: The Book of Laws. The Book of Laws allows players to sign laws that regulate the behavior of the society in two separate aspects: Adaptation and Purpose. It’s a tree-like scheme, because the player need to sign certain laws to gain access to new laws in related topics. Once signed, the laws cannot be unsigned. You can see a detailed list of each law here.
The number of options available to the player, called horizon of action by Upton (2015) is pretty wide. At the beginning of the game, the player could sign up to 6 different laws, each one minding a different basic aspect of the society adaptation. Besides 6 different option could look like a lot (especially considering that is the beginning of the game), but this problem is solved by suggesting to sign specific laws each time a negative event happens, like running out of food or lack of working hands. A window will pop-up suggesting to sign the incumbent law, thus directing the horizon of intent (Upton, 2015), that is to say, the decisions that the player believes are possible to make. 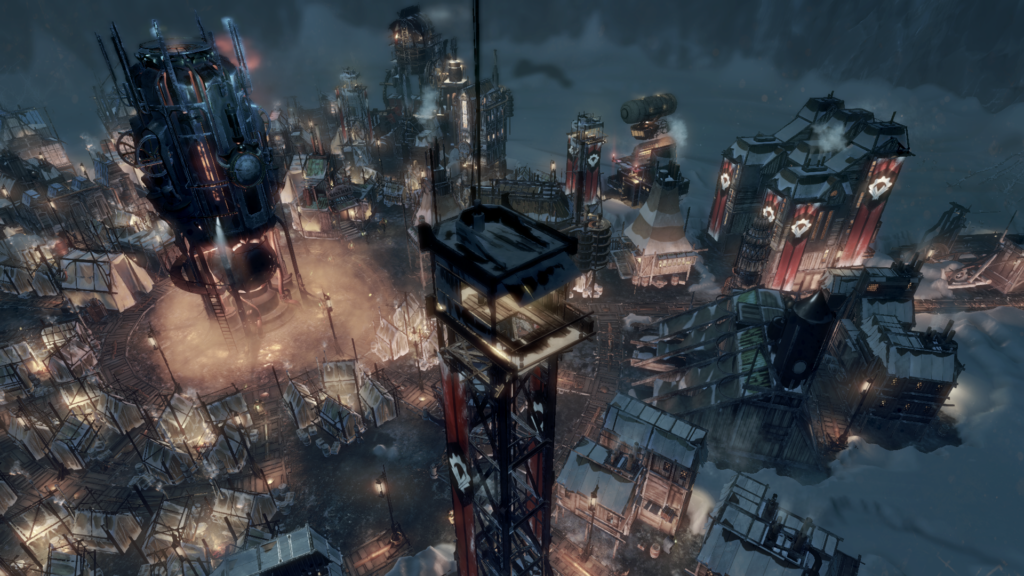 You can save your society for doom but, at what cost?

The Book of Laws: Moral

Most of the moral decisions occur in the so called Emotional and Cultural interactive loops (Sellers, 2018). Moral, loosely defined as the system on which people define between good and evil, is closely related with the systems of the game, especially the society. One important point to make in the Book of Laws is that the player is not obligated to sign any law, but they facilitate the society survival and thus regulates player difficulty.

The two major branches of the Book of Laws, Adaptation and Purpose, serve two different intentions. Adaptation is centered on the basic aspects of society survival, mostly in the early stages. Purpose is divided into two categories, from which the player needs to choose only one to continue forging a purpose for the society. For one side, the Order branch and for the other, the Faith branch. Both give similar bonuses, being different in that the Order branch slowly create a dictatorship, while the Faith turns the society into religious fanatics. Purpose works mostly to increase Hope and decrease Discontent, and deeper branches give bigger bonuses. This is where the main moral conundrum arise respect the Book of Laws. When the player get to the final law in both Purpose branches (called New Order and New Faith respectively), the player most likely will not need the strategic bonus that this final law gives, this is the elimination of the Hope bar, because at this stage of the game with all previous Purpose laws signed, the Hope will be considerably high. This place the player in a difficult situation, because it could gain a strategic advantage that most likely didn’t need at the expense of being a dictator or a divine figure.

Another wise resolution is that when the player enters the Book of Laws, the main game pauses. This aim for the player to take the time to think about it in emotional, social and cultural loops. While there are strategic concerns to the player, the emotional, social and cultural loops take longer to analyze. Some of them will even continue to be analyzed by the player after stops to play the game, what is defined by 11 bit studios’ creative director Michal Drozdowski as “meaningful games” in this 2019 GDC talk. These kind of decisions are called profound decisions by Sylvester (2013), these are decisions that take the player more than 10 seconds to decide and usually does not only convey strategic information but also emotional, cultural and moral implications.

The Book of Laws: Strategic

As has been said, the Book of Laws have moral and strategic concerns. We will analyze the strategic aspect with the heuristic of horizons of intent created by Brian Upton (2015).

Decisions in the Book of Laws at different interactive loops, as called by Michael Sellers in his book “Advanced Game Design”.

Each law signed makes the game easier to play in strategic terms, thus providing a frame for the player to concentrate more on the moral side of decisions, that are usually deeper in the branches. The Book of Laws as a system gives the opportunity to players for explore different paths to survive and to test how much they are willing to transgress their own system of beliefs in order to gain a strategic advantage and ultimately make society survive. This is achieved by giving a strong and transferable meaning to each law and the system of laws as a whole in many different levels, so the player can easily compare the knowledge from the game with the knowledge from the world. Also, it gives the opportunity to different weight on decisions, from short-term strategic advantages to social and cultural meaning that lasts even after finish playing the game.