This blog post was inspired by the research and analysis that I did of Disco Elysium for my latest video for Game Design Thinking.

In this blog, I will go a little deeper into the most important part of the video, namely, the description and explanation of why Disco Elysium’s system is so unique and compelling. We will discuss the role of character’s Skills in the game and why they make the act of balancing the game more dependent on players based on how they decide to upgrade the character. We will also explore the role of the Thought Cabinet as a way to add uncertainty to the game. We will not stop too much in the Narrative work of the game (which is amazing), because the analysis is intended to be a system analysis, besides, there are many videos that fulfill that role better than I could do it right now.

Now, throw your dices, and I hope that what comes of it is a success in your next skill check.

1. What Is Disco Elysium? 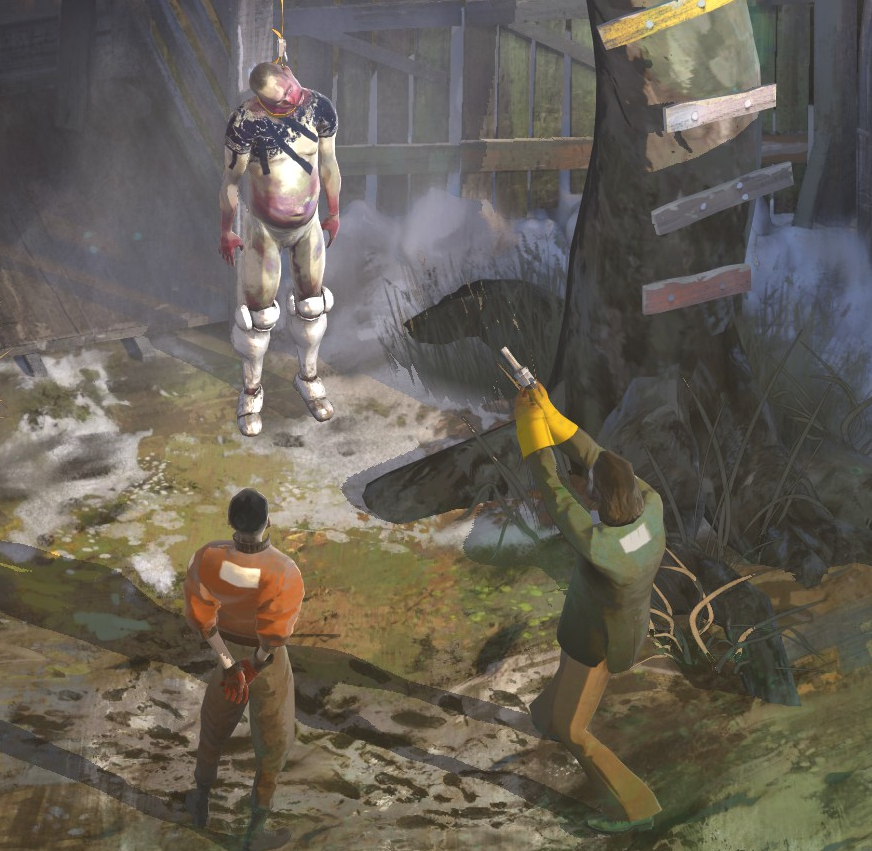 In case you missed the game, after reading this essay and watch the video I would highly recommend to go to your favourite (digital) store and buy the game.

Disco Elysium is a RPG with elements of classic Western RPGs in which players embody a police detective that wakes up after a major meltdown combined with high doses of alcohol and other substances. The character doesn’t remember anything so the player is trying to get the character’s memories back while also trying to solve a murder case.

One aspect that stand out, specially compared to other RPGs is the absence of combat and grinding, two mechanics that are widely used in most RPGs, both to level up and advance the story. In Disco Elysium, all quests are completed by talking and doing actions both in the world and using the conversation panel. It could seem that this would generate a flat and boring gameplay, but the RPG system in which the game is built make sure that the game feels always fresh and enticing for players. But how does this system work?

2. How Does Disco Elysium’s System Works?

As any RPG worth its salt, Disco Elysium start with the character creation using a Character Sheet. First, the player allocate attribute points between Intellect, Psyche, Physique and Motorics. Each one of these 4 attributes have 6 skills that represent different aspects of those attributes. For example, Intellect includes skills such as Rhetoric and Encyclopedia (knowledge of the world) while Motorics include skills such as Interfacing and Hand/Eye Coordination. 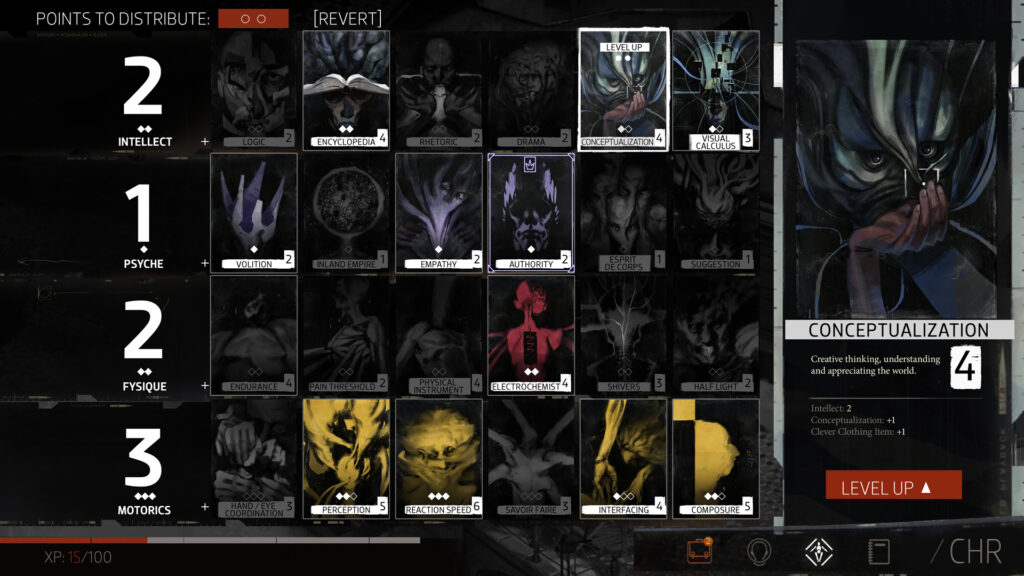 Character Sheet. The base value of the attribute also define how much you can level up a skill.

Skills main use is to be compared against skill checks (or DC if you come from D&D). The character encounters different situations in which he needs to test his skills against an obstacle, in order to pursue a lead or obtain something from another character.

The player, using the conversation panel, can actively engage in a skill check using as a base the character’s skill value plus two six sided dies. There are ‘red’ skill checks, that in case of failing can’t be retried, like in most RPGs. But, there are also ‘white’ skill checks, that can be retried again. In case of failing. After failing, the white check is locked until the player allocate a point on the related skill. Moreover, the player can use different bonuses to increase the likelihood to be successful against the skill check, like engaging in different conversations to acquire new information and using a range of drugs that increase certain attributes.

What is important about skill checks is not only that in case of failure they aren’t as punishing to players as difficulty checks in other RPGs (I’m looking at you insta-kill traps in D&D), but also that failing them (white and red skill checks) can give you dialogue options and narrative moments that are as or more interesting and fun that in success. You sometimes can lose 1 life or morale point, but that’s nothing compared to a fun piece of narrative. This is amazing, because you help players to get rid to their fear of failure, thus increasing the probability of them engaging with the system. Don’t be so harsh with your players, they are playing to have a fun and engaging experience, not to be judged.

But another, and arguably a more important aspect of Skills is the passive checks. When you are talking with another character (or with yourself), in certain parts of the conversation, some skills will do a passive check. In case of success (and sometimes on failure) the skill will interrupt the conversation and give the character their opinion.

This would be nothing special if it wasn’t because each skill represent a different aspect of their attribute, therefore, each skill has its own agenda. Sometimes your ‘Volition’ skill will entice you to do something while ‘Inland Empire’ (both dependant on the Psyche attribute) will tell you that it feels something wrong in doing it. These passive skill check can also open dialogue options, so players must choose to which skill they listen to.

But here is where it gets (more) interesting. Since you are of course completing tasks and earning precious skills points, your skills’ level are getting higher and higher. The higher they are, the more they are going to interrupt the character’s conversations. This implies that the character will receive more advice from more skills as the game advances. Some of these advices are plain bad for the character, making him lose life, morale and putting him into all kinds of trouble. Thus, the more you advance the game and the more diversified your higher skills become, the more difficult it will be for players to choose a path to follow. This is an amazing piece of design, because on one side it’s an act of players self-balancing the game, because the difficulty doesn’t come from the outside (like more powerful enemies or need to earn more XP points to level up), but from the mind of the character and players themselves. The difficulty comes from choosing a path, based on the information given to them by their skills. On the other hand, it supports the narrative, namely, that the more memories the character has of his former self, the more it becomes unstable and chaotic again. This is what transforms a game from great to masterpiece. 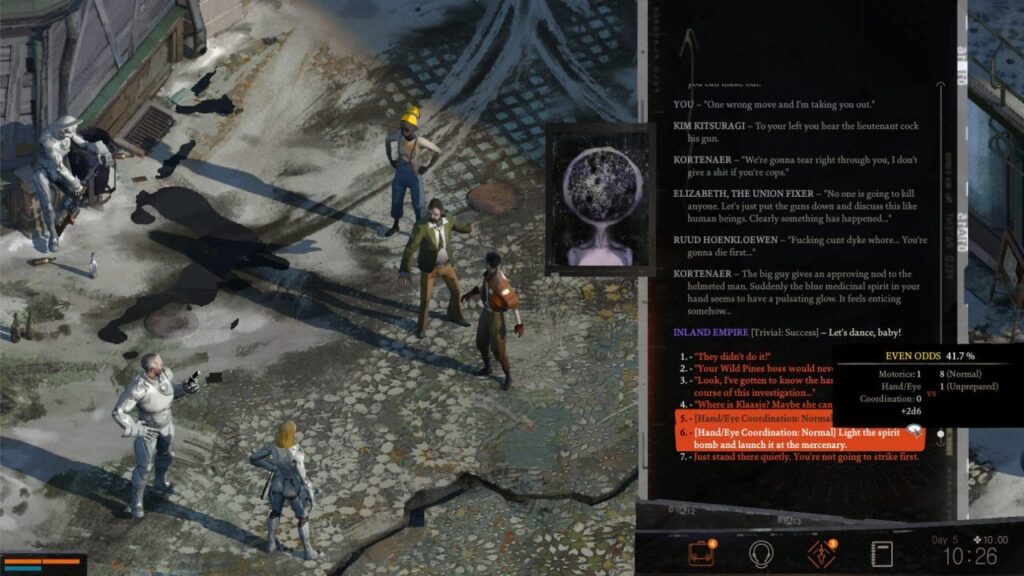 And talking about memories, the last piece of the system that is important to notice is the Thought Cabinet. As in most RPG games, players expect some kind of ‘loot’ given to them for completing quests or doing some actions besides the main objective. In Disco Elysium’s case, Thoughts are what fulfill that player need. When players engage in some actions or conversation paths, a skill will engage in a conversation to suggest a Thought to the character. It’s important to notice the italics in suggest, because the player can choose to discard the thought. 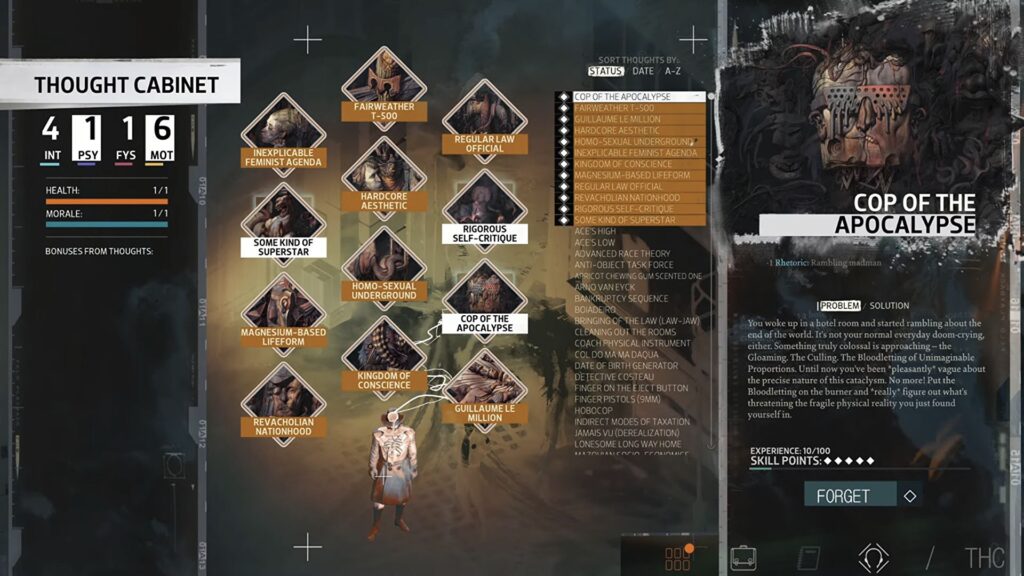 In the center, Thoughts already internalized. The list on the right represents unlocked and locked Thoughts.

When the player accept the Thought, it must be internalized using the Thought Cabinet, that has a limited space to internalize Thoughts. After a few in-game hours, the Thought will be internalized and is going to give the character a bonus to a skill, attribute or just a bonus for following certain conversation paths (like communist or ultra-liberal comments).

What is important to notice is that the player doesn’t know the bonus until the Thought is already internalized. This adds a lot of uncertainty in a system (not a narrative) that has very little uncertainty. A great piece of UX design is that players can forget the Thoughts or open new slots, so if they don’t like a Thought, it’s not the end of the world. The system has the versatility to allow error recovery, which is one of the pillars of a great UX.

3. The Difference Between Disco Elysium and Other RPG Systems

Both systems have a main reinforcing feedback loop (players advancement) managing players’ level increase that consists mostly on engaging and completing a task/quest, earning bonus point to increase skill levels, which in turn increases participation and completion of more tasks.

What sets Disco Elysium’s system apart is the balancing feedback loop, namely, player opposition. In most RPGs, including D&D, the opposition comes from more powerful enemies. The more powerful the character is, the more powerful enemies must be to create an adequate challenge to players. This is achieved through pure playtesting or using dynamic balancing. In Disco Elysium, as we saw, the opposition comes from the players themselves. The only thing that generates a more difficult challenge is that skills are more nosy as they are more powerful, thus generating some kind of choice overload and insecurities about which path to take.

This small difference has big repercussions in the balance of the game. Unlike most RPGs, in Disco Elysium the character always need 100 points to level up, thus making the XP needed more transparent and easier to see and calculate for players. This also means that tasks don’t need to be balanced according to the character’s level so a quest acquired on level 1 can be as relevant in level 10 because both quests points and XP needed for level up are fixed values, avoiding the risk of quests becoming obsolete. In D&D and other RPG systems, it’s common for players to not complete earlier quests because at their current level, the reward will be insignificant. Disco Elysium’s system entices players to interact with all missions based on their narrative interest on them, not on their systemic one. The system is supporting the narrative of the game. 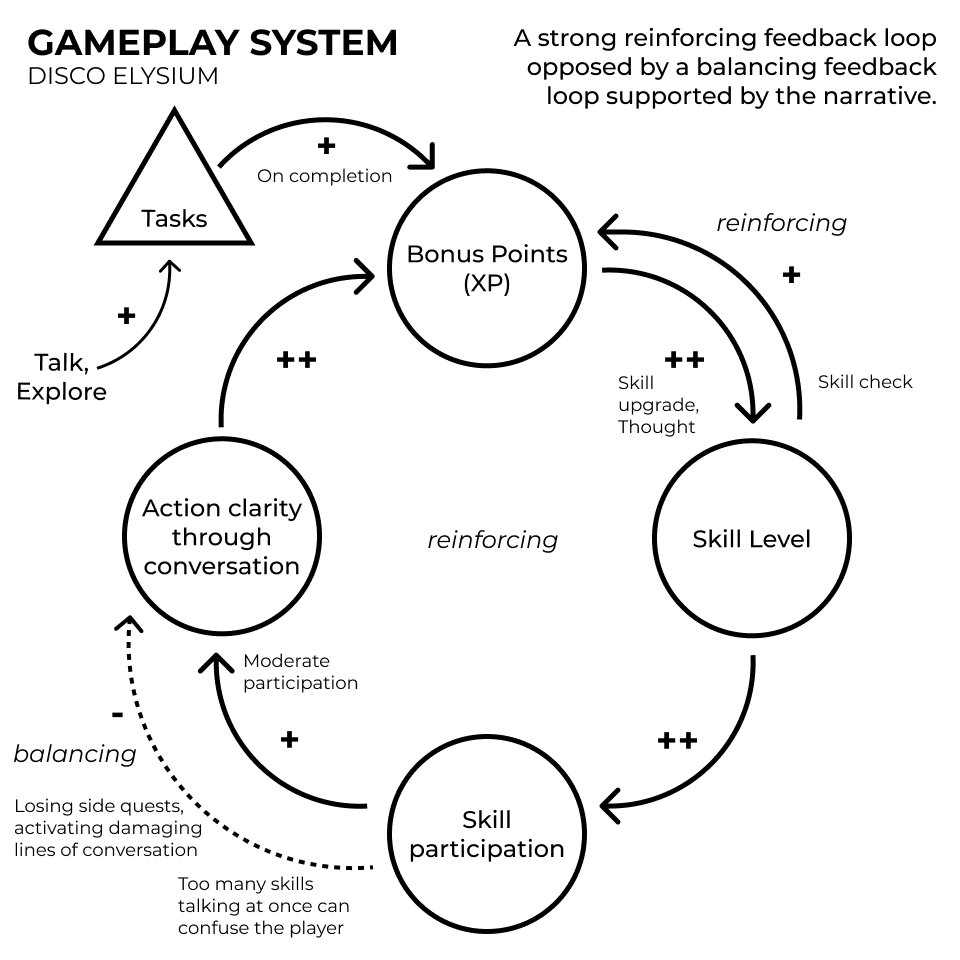 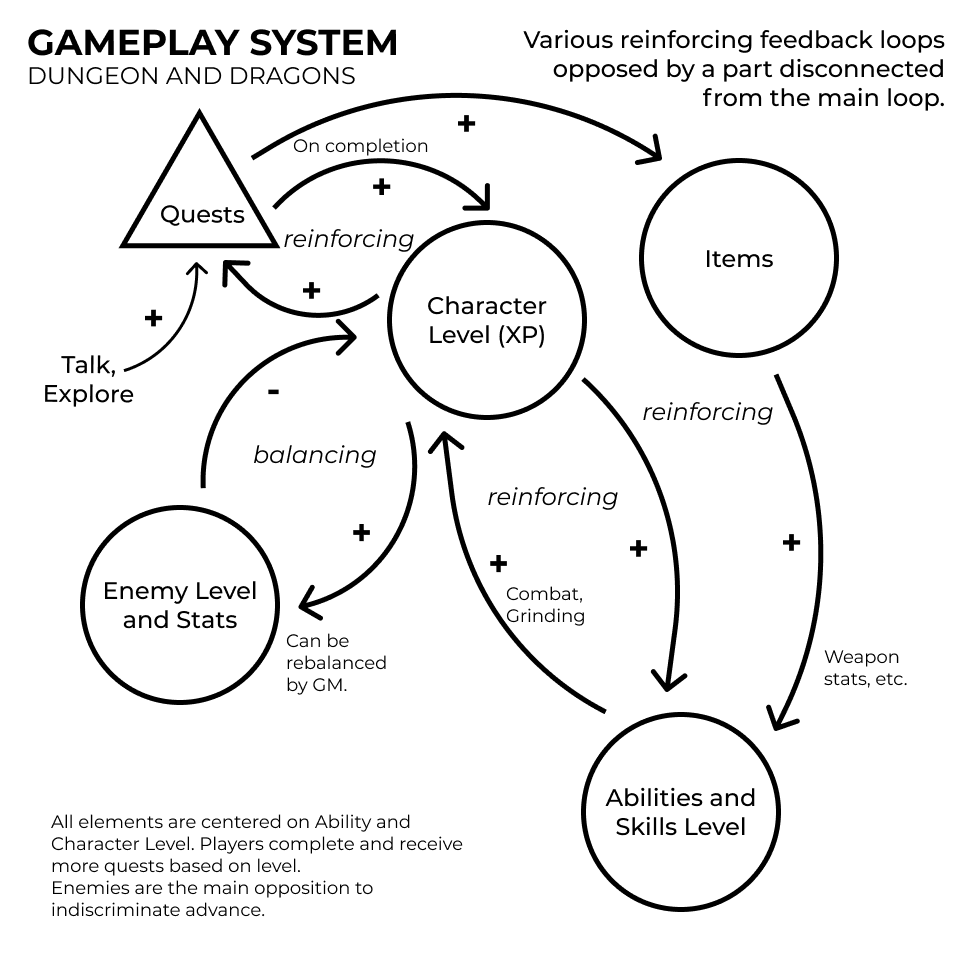 Disco Elysium is one of those games that came to shake a genre from its foundation. There is still a lot to explore, of course, but Disco Elysium is here to prove that RPGs are more alive than ever and that there is space to create and devise new systems that can improve players’ experience and that uses the system of the game as a support to the narrative, not being in the center of the stage (as it should be in my opinion).

RPGs are not about mastering a system or grinding, they are about roleplaying. If your system is interrupting that, take Disco Elysium as an inspiration to create a simpler yet powerful system that will allow your players to have many hours of fun and your narrative team plenty of space to create an engaging narrative that connect with player emotions.

If you like this post, don’t forget to subscribe to our newsletter to receive a 1-page summary of the information in our videos, as well as other news. I promise not to send you more than 1 email a week. I don’t want to live in your spam folders. I hope you liked the analysis and be sure to follow me on Instagram and YouTube so you don’t lose any new game design analysis and essays.